All of which promote a sense of calm + relaxation.
Written By

Terpenes are what give things like pine trees + orange peels their distinct scents. So what do they have to do with CBD + sleep?

In an effort to demystify the wellness lingo around CBD, we’re digging into all things terpenes. This diverse class of organic compounds is produced primarily by plants and select insects. As the primary constituents of essential oils, terpenes are what give everything from pine trees to orange peels their distinct, aromatherapy scents. Popular terpenes include Myrcene, Caryophyllene, Terpinolene, Linalool, Nerolidol, Pinene, Limonene, Terpineol, Terpinolene, and Phytol.

So what do they have to do with CBD? It all boils down to the entourage effect, or the theory that various compounds in cannabis work synergistically to create unique effects and benefits. Terpenes play a role by either altering the way CBD binds with receptors in the body’s endocannabinoid system or producing an effect that compliments that of the CBD.

Broad spectrum hemp extract is a type of CBD that contains almost every compound in the cannabis plant, including cannabinoids, flavonoids, and terpenes. However, because the terpenes are in small, barely traceable amounts, you may find CBD supplements with additional terpenes added to the formulation. (CBD isolate, on the other hand, is composed of 99% pure CBD and stripped of all other ingredients, including flavonoids, THC, and terpenes.)

Below are five different cannabis terpenes that specifically promote a sense of calm, relaxation, and drowsiness to combat insomnia due to their natural anxiolytic (anxiety-reducing) and analgesic (pain-reducing) effects. As you’ll notice, the research for each terpene profile is emerging, which means studies are still in progress, information is constantly evolving, and no trials have been conducted on humans in the public domain. But here’s what we know to date on terpenes as sleep aids:

What is myrcene (aka beta-myrcene, or β-myrcene)?
Myrcene is the most abundant terpene in several cannabis strains and is also naturally found in fragrant fruits and herbs such as mangoes, lemongrass, and basil—plus cherry pie. It’s recognized for its musky clove scent and is actually a component of hops used in beer.

Strains of cannabis that contain high levels of myrcene include white widow, Skunk XL, and Special Kush 1. Depending on myrcene levels, this terpene can either produce “indica” (relaxing) effects or “sativa” (energizing) effects.

Emerging research:
It is being studied for its sedative effects and inflammation/chronic pain-reducing properties. (1-2)

What is beta-caryophyllene (aka BCP, or β-caryophyllene)?
BCP is a peppery terpene found in strains of cannabis, as well as black pepper, cinnamon, cloves, oregano, basil, and rosemary. It is one of the only known terpenes that binds to cannabinoid receptors (3) (the same ones that THC binds to) and may provide some of the benefits associated with CBD’s “entourage effect.” (4)

As a dietary cannabinoid, BCP has been approved by both the Food and Drug Administration (FDA) and European Food and Safety Authority (EFSA) as a food additive, taste enhancer, and flavoring agent “generally recognized as safe.”

Emerging research:
With the activation of CB2 receptors, BCP is thought to have pain-relieving properties, as well as an effect on inflammation, heart disease, osteoporosis, osteoarthritis, diabetes, anxiety, depression, and the immune system. Like Myrcene, no BCP trials have been conducted on humans in the public domain. (5-9)

READ MORE: How To Read A CBD Certificate Of Analysis (COA)

We start with our Core formulation of clinically-studied, non-hemp ingredients at dosage levels proven to promote sleep. From there, we add broad spectrum hemp extract, omega-3 oil, + terpenes.

What is linalool?
Linalool is found in cannabis products, as well as lavender oil, mint, cinnamon, coriander, rosewood, and birch trees. It appears to be most responsible for the spicy, floral scent of cannabis.

Emerging research:
It is being studied for its relaxing effects on anxiety, as well as depression, insomnia, pain relief, inflammation, and neurodegenerative disease (arthritis, Alzheimer’s Disease, seizures, insomnia). (10-15)

What is beta pinene (aka β-pinene)?
Beta Pinene is the most common terpene in the world and one of two isomers of pinene (the other is alpha-pinene, or α-pinene). It’s found in cannabis as well as foods and natural products such as coniferous trees, pine, rosemary, eucalyptus, basil, and cumin.

Emerging research:
It is being studied for its anti-inflammatory, anti-microbial, anti-anxiety, and memory-supporting effects. (16)

What is terpinolene (aka terpinene)?
The cannabis plant contains far lower levels of terpinolene than any other terpene, but it's worth mentioning nonetheless. This floral, herbaceous ingredient shows up in lilacs, nutmeg, apples, parsnip, cumin, piney conifer trees, and tea tree oil.

Emerging research:
It is being studied for its anti-inflammatory and antioxidant properties, as well as its mild sedative properties. (17-19)

Interested in learning more about how CBD can support a good night's sleep? Refer to our full guide to broad spectrum hemp extract for the low-down on what it is, what emerging science says about it, and different forms to take it (capsules, tinctures, edibles, topicals, etc). 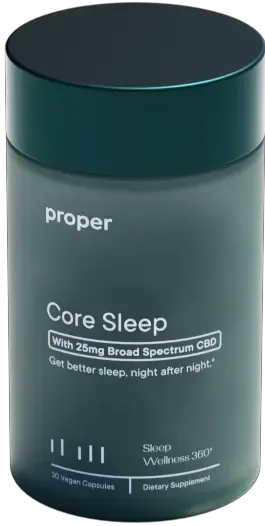 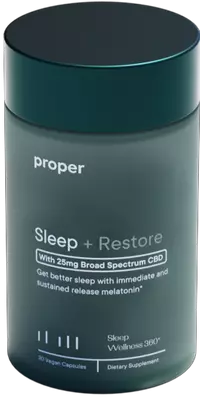 FAQ: How To Get Better, Restful Sleep At Night
What Stage Of Sleep Do You Dream: REM Sleep or Deep Sleep?
How Much Sleep Do You Really Need?
How Long Should Sleep Supplements Take To Begin Working?