Which sleep aid is safer + more effective?
Reviewed By

When it comes to better sleep, melatonin and Benadryl are two of the most common household names—but they’re not made equal. We're diving into the science behind how they differ in safety and efficacy.

Benadryl is the over-the-counter brand name for diphenhydramine/sominex, an antihistamine that’s used to relieve symptoms of hay fever (aka seasonal allergies), the common cold, itchy skin due to mosquito bites, hives from allergic reactions, and more. It may be habit-forming, meaning a psychological dependency may occur, rather than a physical dependency—if taken regularly. (1)

As the name suggests, antihistamines work to reduce or block histamines, which are chemicals produced by the immune system. For the most part, antihistamine medications are used to reduce or eliminate allergy symptoms. Histamine receptors also affect wakefulness, antihistamines have a secondary use as sleep aids because users often experience a feeling of drowsiness.

Despite the fact that diphenhydramine is used in several over-the-counter sleep aids, Benadryl itself is not recommended for sleep. In fact, the American Academy of Sleep Medicine has officially suggested that clinicians not use this antihistamine as a treatment for sleep onset and sleep maintenance insomnia in adults. (2)

Contrary to what many believe, antihistamines do NOT lead to better quality sleep. A Consumer Reports study found that most OTC sleep aids increase total sleep duration by 20-30 minutes. (3) At face value, that sounds like a good thing (who wouldn’t want 30 more minutes of shut-eye?), but is it worth it when sleep quality suffers?

When you dig deeper, you’ll find that sleep time is only part of the story. The quality of your sleep—the amount of deep and REM sleep—matters, too. When you use drugstore sleeping pills with antihistamines, sleep quality may suffer. Here’s why:

The reason? Acetylcholine. This neurotransmitter plays a critical role in rapid eye movement sleep, otherwise known as REM. (4) During this time of the night, brain waves are far more active, although muscles remain fully relaxed. Because of the disparity between the brain increasing activity and the muscles remaining inactive (known as atonia), REM is sometimes referred to as “paradoxical sleep.” We spend about 20-25% of our sleep time in this stage, which benefits cognitive functions such as memory consolidation, creativity, and learning. (5-6)

Antihistamines—which are a sub-group of medications under the larger anticholinergic group—block acetylcholine, (7-8) and this disruption in acetylcholine metabolism may cause REM sleep to suffer, which is one reason why upwards of 40% of people taking OTC sleep aids report feelings of fogginess or drowsiness the following morning. (3)

This side effect is particularly concerning for older adults who typically metabolize medications at a slower rate. According to studies from Consumer Reports, 1 out of 10 adults 65 and older who take OTC sleep aids report feeling “uncoordinated, tripping, or falling.” What’s more, they’re 34% more likely to fall than those not taking sleep drugs. (3)

What are the long-term risks of antihistamines?

In two Journal of American Medicine (JAMA) studies, (9-10) researchers concluded that taking an anticholinergic continuously for the equivalent of three years was associated with around a 50% higher risk of dementia in older adults than taking the same dose for three months or less.

Proper formulations contain clinically-backed ingredients at effective dosage levels. They won’t knock you out or leave you groggy.

What are the side effects of Benadryl?

Outside of sleepiness and sedative effects of Benadryl, common short-term side effects include dry mouth, dizziness, and headaches. (11)

Melatonin is a hormone produced by the pineal gland in the brain, then released into the bloodstream. Quantities naturally increase as the sun goes down and decrease during daytime hours and exposure to bright light, thus regulating the sleep-wake cycle (aka circadian rhythm).

When it’s produced within our bodies, it goes by the name endogenous melatonin; however, some also choose to supplement their natural levels as a way to effectively adjust and regulate their body's internal clock if they have trouble sleeping. Unlike Benadryl, melatonin is non-habit-forming.

Does melatonin help you sleep?

Perfect for people who struggle falling and/or staying asleep.

There is research supporting the efficacy and safety of melatonin. One meta-analysis, (12) which compared melatonin against placebo in improving sleep parameters for patients with primary sleep disorders, showed that the supplement reduced sleep latency (the amount of time it takes to fall asleep) by 7.06 minutes and increased total sleep time by 8.25 minutes. Also promising was the fact that trials with a longer duration and higher doses of melatonin demonstrated greater effects on decreasing sleep latency and increasing total sleep time.

Who is melatonin best for?

Melatonin is best for those suffering from circadian rhythm sleep disorders such as:

What is the recommended dose of melatonin?

Melatonin is commonly consumed between 1 (low dose) and 5mg by healthy adults. (14)

How should I expect to feel when taking melatonin (vs Benadryl)?

While traditional sleep medications may leave you feeling “knocked out,” drugged, or groggy, for the most part that won’t be the case with natural sleep supplements like melatonin. Also, you will likely awake to normal noises, which is a good thing! No one wants to sleep through something like a fire alarm or a child crying in the room next door. The goal of supplemental melatonin consumption is when you wake up, you’ll be able to fall back asleep without hours of tossing and turning. THAT’s the key difference here.

So if you do wake up to something like this, that’s not a sign that the supplement isn’t working...the opposite, actually. It’s working exactly how it should be by helping you get a good night of natural, refreshing, high-quality sleep.

What are the side effects of melatonin?

A small percentage of melatonin users have been found to experience next-day drowsiness/grogginess, sleepiness, headaches, and dizziness; however, there is no evidence of a risk for serious, clinically significant adverse events (AEs). (15) As a precautionary measure, it’s recommended that users not drive or use machinery for four to five hours after taking melatonin in the case of impairment.

Before beginning any new dietary supplement regime to target sleep problems, it's best to consult your healthcare provider for medical advice.

What should I look for when selecting melatonin supplements?

It's important to do your research to ensure your supplement of choice contains what it says it does and is not contaminated with heavy metals or pesticides. Here's what to look for when selecting a melatonin supplement for short-term or longer-term use: 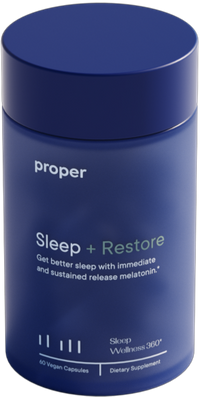 How Safe + Effective Are Most Over-The-Counter Medications As Sleep Aids?
Guide To Valerian Root For Sleep: Overview, Uses, Side Effects, + More
Do Natural Sleep Aids Work? Our Head Formulation Scientist Weighs In.
How Long Should Sleep Supplements Take To Begin Working?
CBD vs Melatonin For Sleep

4 Ways A Coach Can Help You Build Better Sleep Habits
7 Reasons You May Be Tired Even Though It Feels Like You Got A Good Night's Sleep (sleep hygiene, health conditions, sleep disorders, etc)
Are Sleep Problems Hereditary?
When To See A Sleep Specialist: 6 Signs + Symptoms (sleep apnea, chronic insomnia, narcolepsy, restless leg syndrome, etc)